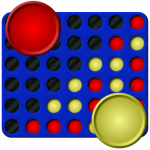 Thanks for downloading «4 in a Row» also known as «Four in a Line».

Four in a row is free!

You can play with another person or against the Artificial Intelligence module(Ai). The Ai of this game is not predictable as in other games.
Operation:
This game is a two-player game in which each one chooses a different color for your chips and by shifts launches one at a time in a panel of 7 columns x 6 rows.
The chips piling up in his column.

The objective of the game is to connect pieces of the same color forming a line horizontally, vertically or diagonally before your opponent does.
Players start playing in rotating shifts.

Four in a row in 4 languages: